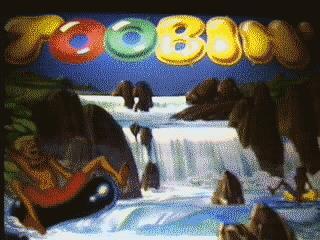 The Tribute
Its time to put on your swimsuit, drop a coin down the coin slot and take a trip down the roaring rivers in the pursuit of treasures, spare patches for your tubes, as well as soda cans and six packs to fire at your enemies along the river.

The Facts
Manufactured by Atari, with a copyright of 1998, Toobin’ is a one of the newest games in my collection and is surprising enough not a JAMMA machine, despite the age of the machine. A slim case with a cool moving waterfall in marquee add to the charm of this game.

Pictures Sounds
So what's your story?
In a nutshell nothing, This machine is without a doubt the nicest machine I have picked up for my collection. Purchased from fellow New Jersey collector Steve Zeuner, this sought after collectable needed nothing. The coin doors were already painted, most of the side art is there, and the control panel is n good shape less a small crack in the corner at the bend. The side Gators were also missing but were replaced with repro stickers from Apollo
I have found a replacement panel recently on auction, that has no cracks but is a little dirtier then the one on my machine. At this point I'm not sure which on looks better?
One of the nicer items on this game is the moving waterfall which both works and runs quietly. Normally, should you find one of these machines, the waterfall is non functional or sounds like there is a pound of sand in the motor. This is also the only game I leave in free play
Normally when I get a new machine, if it was set up for free play, I reset it back to run on coins. Many games don't cycle through its attract screens but settle on one static screen announcing the ability to begin play at any time. This feature normally robs you of some of the graphics of a game an tend to burn the screen of your game. Fortunately Toobin, doesn't operate this way and continues to cycle though it's screens normally. The buy in capability of this game also adds to the need to leave the machine in "free play"

Picture Gallery of My Toobin' 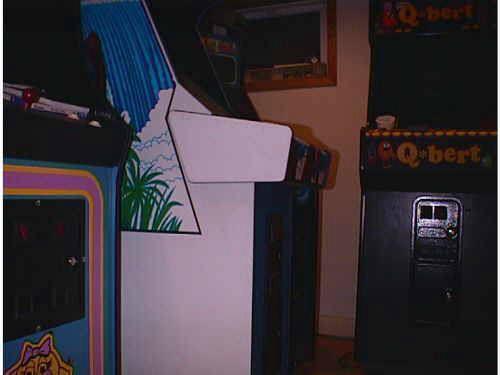 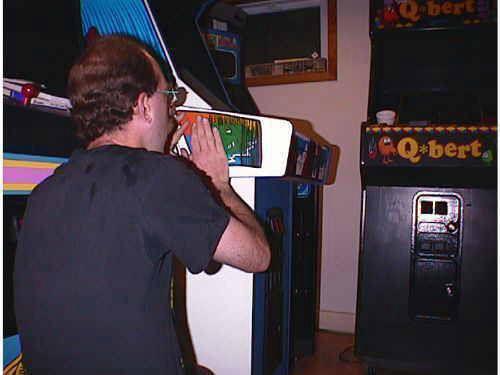 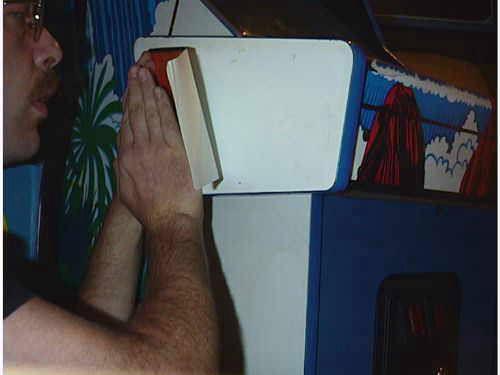 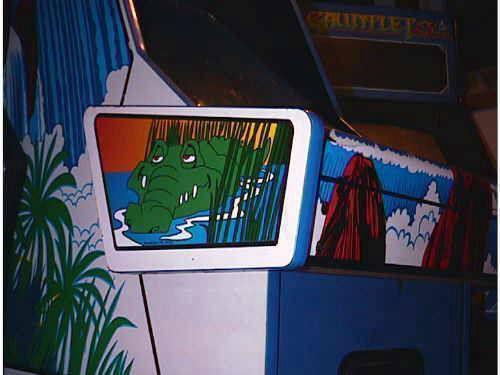 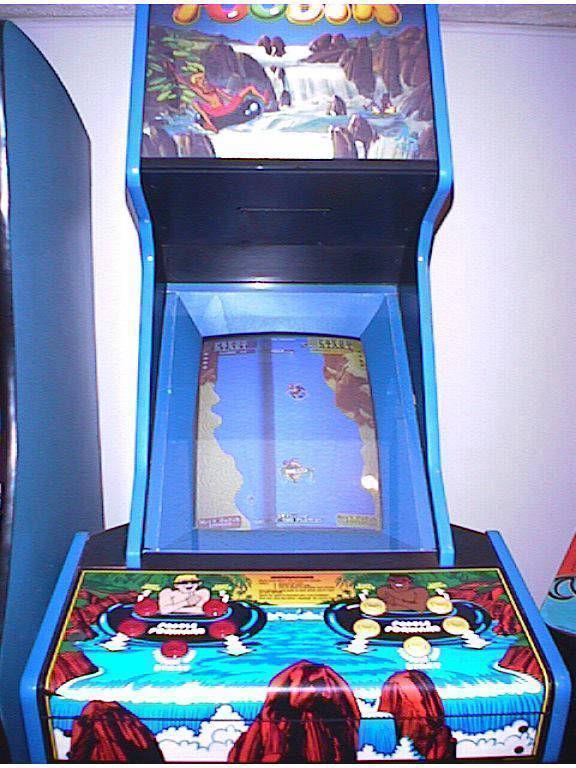 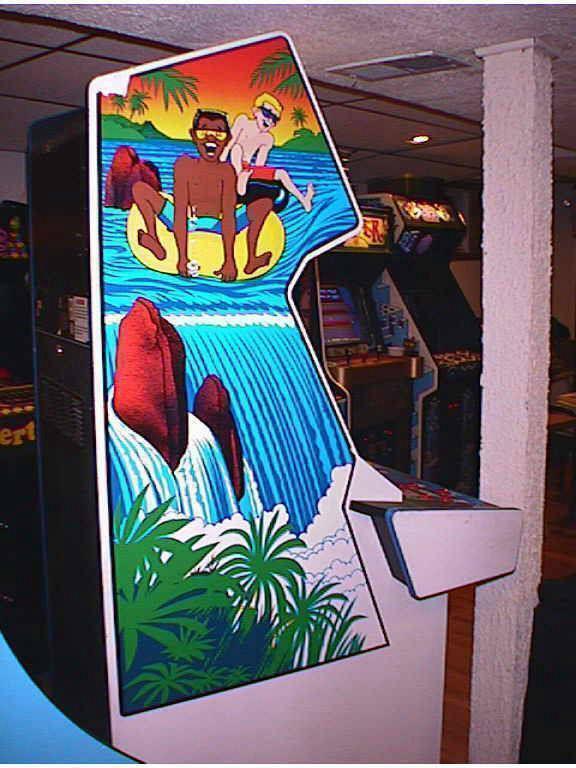 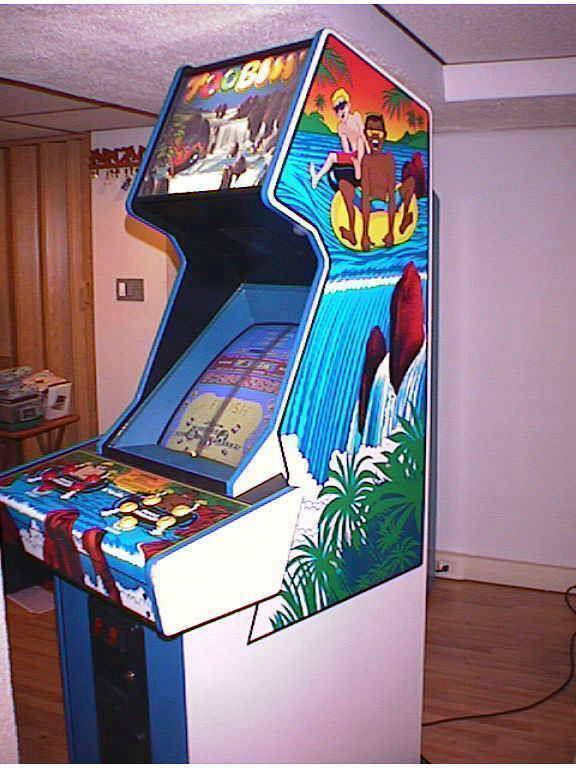 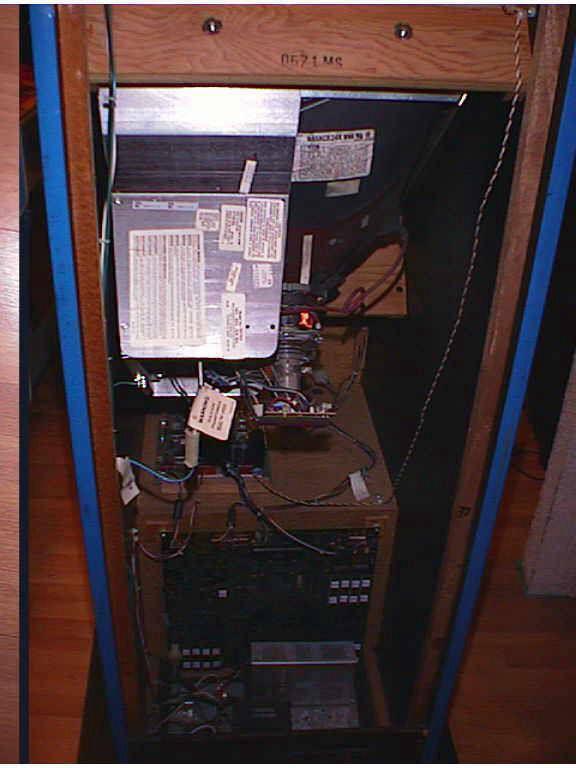 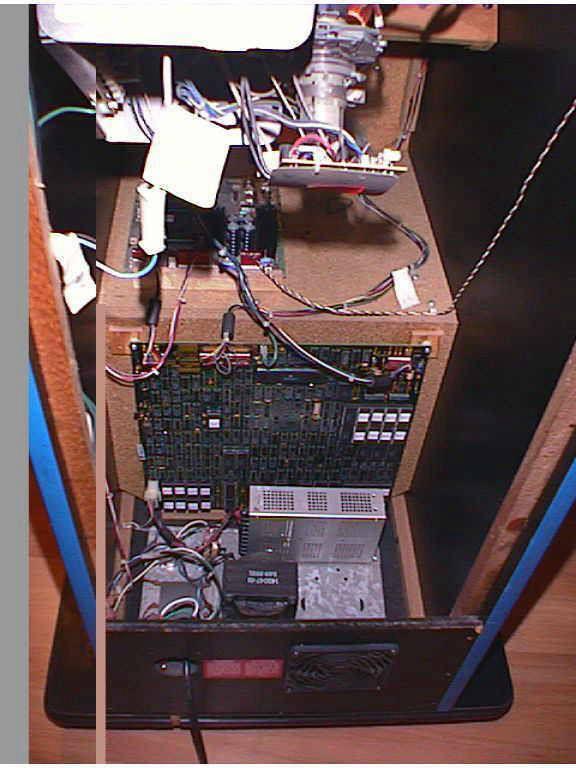 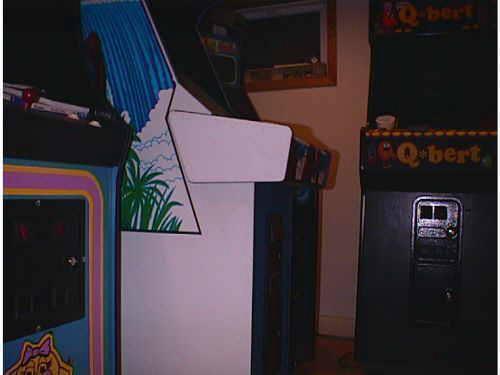 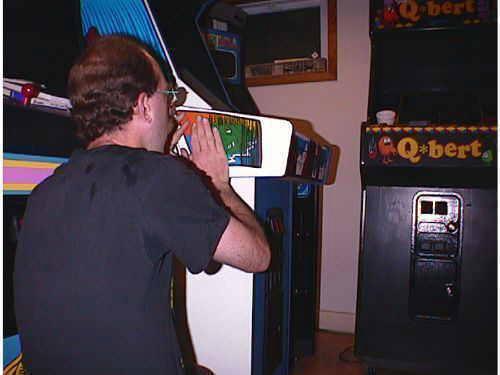 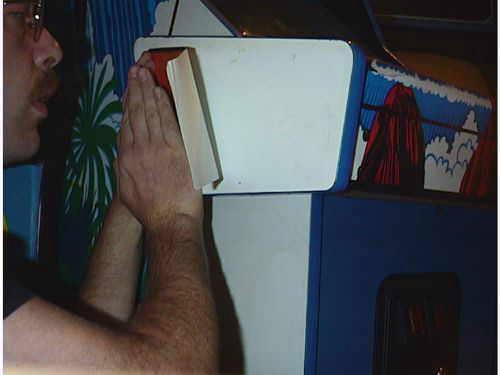 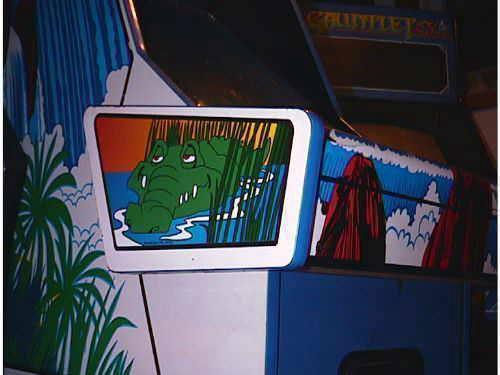 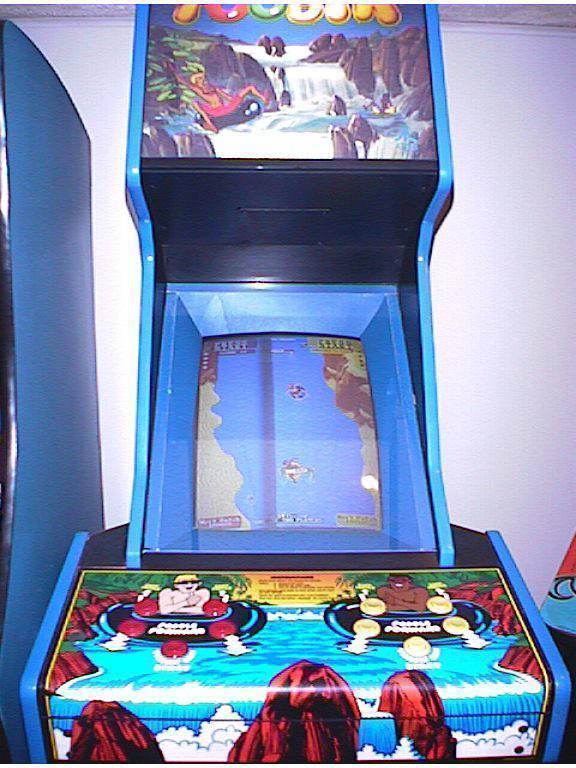 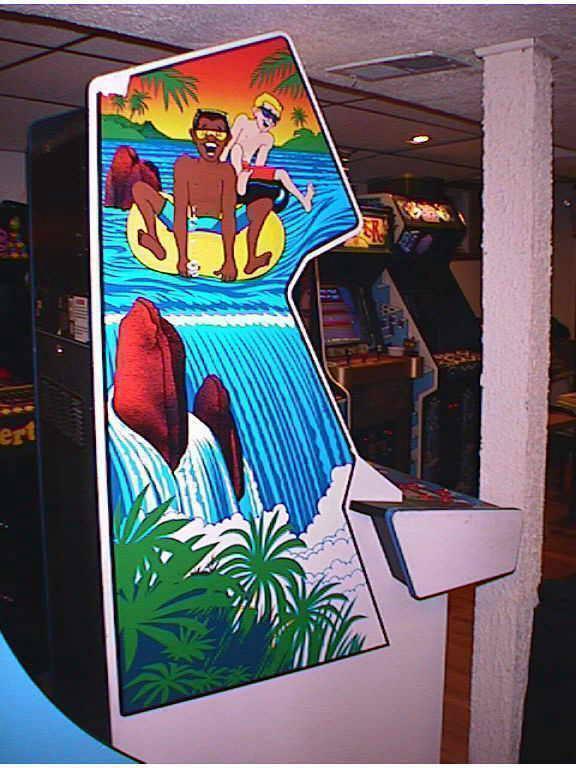 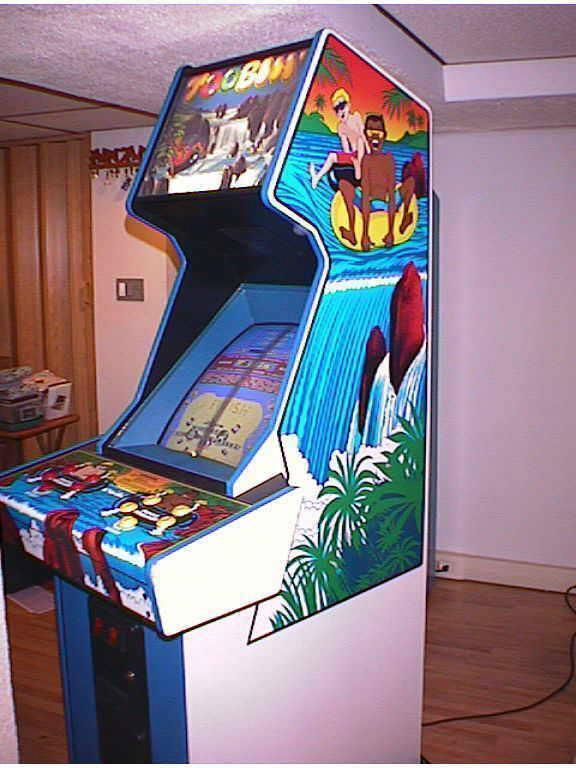 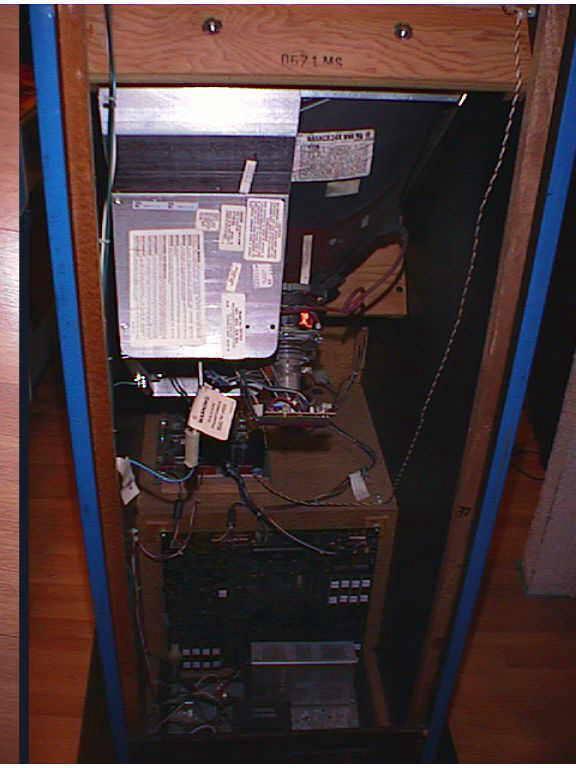 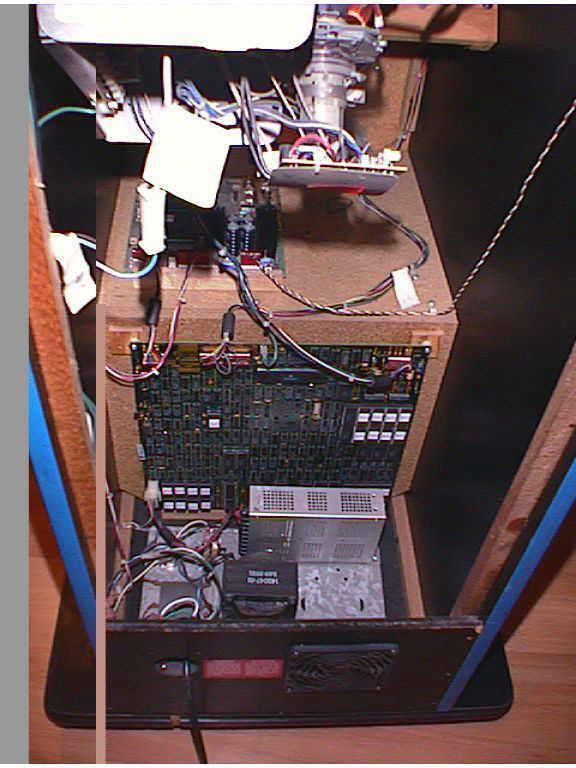